Things You Might Not Know About the Fourth of July 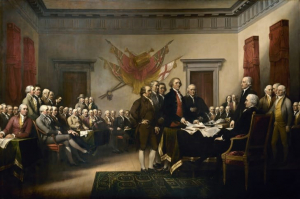 Previously the Fourth of July is packed with backyard barbecues and plenty of fireworks. With years of tradition behind it, you would be forgiven if you didn't know quite everything about America’s Independence Day. Starting with the true story behind the signing of the Declaration of Independence to some hot dog statistics, here are 10 things you might not know about the Fourth of July.

THE DECLARATION OF INDEPENDENCE WASN'T SIGNED ON JULY 4 (OR IN JULY AT ALL).

It might make for an iconic painting, but this image of all the Founding Fathers and Continental Congress huddled together, presenting the first draft of the Declaration of Independence for a July 4, 1776 signing isn't quite how things really happened. As David McCullough wrote, "No such scene, with all the delegates present, ever occurred at Philadelphia."  It's generally accepted that the Declaration of Independence wasn't signed on the Fourth of July—that's just the day it  was formally dated, finalized, and adopted by the Continental Congress,. It was officially voted independence on July 2 (the day John Adams thought we should celebrate). John Hancock and Charles Thomson signed early printed copies of the Declaration. The bulk of the other 54 men signed an official engrossed (finalized and in larger print) copy on August 2, with others following at a later date. Hancock signed his name again on the updated version.

THE FIRST FOURTH OF JULY CELEBRATIONS WEREN'T MUCH DIFFERENT THAN TODAY'S.

After years of frustration, the colonies let loose upon hearing the words of the Declaration of Independence in 1776.  In Savannah, Georgia, the citizens burnt the King in effigy and held a mock funerall for their royal foe.  Independence Day celebrations began to look a bit more fimiliar the following year.  Barbeques, fireworks, parades true festivities began to emerge.

MASSACHUSETTS WAS THE FIRST STATE TO RECOGNIZE THE FOURTH OF JULY.

Massachusetts recognized the Fourth of July as an official holiday on July 3, 1781, making it the ffirst state to do so. Congress hadn’t even begun designating federal holidays until June 28, 1870 with the first four being New Year's Day, Independence Day, Thanksgiving, and Christmas. This decreed that those days were holidays for federal employees. However, there was a distinction. The Fourth was a holiday "within the District of Columbia" only. It took years of new legislation to expand the holiday to all federal employees.

THE OLDEST ANNUAL FOURTH OF JULY CELEBRATION IS HELD IN BRISTOL, RHODE ISLAND.

Eighty-five years before the government recognized Fourth of July as a federal holiday, one tradition began that continues to this day. Billed as "America's Oldest Fourth of July Celebration," the town of Bristol, Rhode Island, has been doing Independence Day since 1775.The festivities began just two years after the Revolutionary War ended, and 2020 will be its 235th Anniversary. Over the years, the whole thing has expanded well beyond July 4; the town of 23,000 residents now begins to celebrate the United States on Flag Day, June 14, all the way through to the 2.5-mile July 4 parade. What began as a "patriotic exercise"—meaning church services—has grown into a cavalcade of parades, live music, food, and other activities. In 2020, because of the coronavirus pandemic, the festivities will be much smaller and spread throughout the summer.

THE SHORTEST FOURTH OF JULY PARADE IS IN APTOS, CALIFORNIA.

The Fourth of July parade in Aptos, California, is just over half a mile long. Afterward, there's a Party in the Park, where folks can enjoy live music, food, and games.

THERE ARE AROUND 15,000 INDEPENDENCE DAY FIREWORKS CELEBRATIONS EVERY YEAR.

According to an American Pyrotechnics Association projection approximately 15,000 firework events occur for the Fourth of July holiday.  Pricing varies with small towns spending anywhere from $8000 to $15,000 and larger cities going into the millions.  It is said the Boston Pops Fireworks Spectacular averages more than $2 million.

AMERICANS ALSO SPEND BILLIONS ON FOOD TO CELEBRATE THE FOURTH OF JULY.

In 2019, the National Retail Federation  predicted Americans would spend around $6.7 billion on treats to celebrate the Fourth of July. This includes food and other cookout expenses, averaging out to about $73 per person participating in a barbecue, outdoor cookout, or picnic.

Let’s not forget the booze. According to the Beer Insstitute, "more beer is sold on and around the Fourth of July holiday than during any other time throughout the year." Generally, Americans will spend around $1 billion on beer for their Fourth celebrations, and more than $560 million on wine.

THREE PRESIDENTS HAVE DIED, AND ONE WAS BORN, ON THE FOURTH OF JULY.

Did you know that both Thomas Jeffferson and John Adams died on July 4, 1826? This was 50 years to the day after the Declaration of Independence was adopted. They're not the only presidents to have died on the Fourth, though; James Monroe, the fifth president died just a few years later on July 4, 1831.

There was one future leader born on Independence Day. The country's 30th President,  Calvin Cooledge, was born on July 4, 1872.

So while 2020 will be very different, here is hoping it will start to mend and bring us back together.   Happy 4th of July!!!