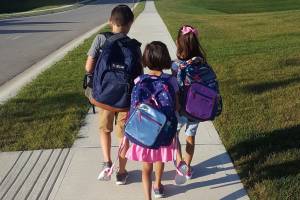 According to school officials. Forsyth County Schools Superintendent Dr. Jeff Bearden will present the system’s early plan for reopening schools in the fall to the Forsyth County Board of Education on Tuesday, June 2, during a special-called virtual meeting.

The plan is currently in draft form and is separate from guidelines being developed at the state level.  It will provide but the first glimpse of what face-to-face instruction might look like for Forsyth County’s more than 50,000 students.

This plan is just a starting point.  The school system’s final plan for the fall will have to account for the state’s guidelines. Last week, Gov. Brian Kemp and State School Superintendent Richard Woods formed six “K-12 Restart Working Groups”.

The group is made up of 72 members include educators, public health officials and representatives of state agencies and nonprofits. They are responsible for distance and professional learning; school meals; mental health and wellness; connectivity and devices; supplemental learning; and facilities, transportation, and equipment.

Those groups aren’t expected to complete their work until late June. This will mean Forsyth County Schools are not likely to make a final decision on reopening until July.  School officials are cautiously optimistic school will start back in August.

But he said school officials are also working on plans for several scenarios, including hybrid models and full-time virtual learning.

The school system has already stocked up on cleaning and protective supplies and implemented new safety measures and policies in preparation for students and staff returning to school in the fall.  According to the information the system has at least 18 months of cleaning supplies.

Custodial crews have been deep-cleaning school buildings since April. A new system notifies anyone in a school facility which rooms have been disinfected. And they have increased building inspections by an outside company. School buses will be cleaned and sanitized before and after every route.

Michael Satterfield, director of transportation, said school buses will be cleaned and sanitized before and after every route.

School nurses will be supplied with N95 masks and other personal protective equipment.  In addition, each school will get 10 no-touch thermometers to screen students.

Schools are also designating a “safe room” to isolate students that show symptoms of COVID-19, the disease caused by the novel coronavirus SARS-CoV-2, until their parents can pick them up.

The school system also plans to recommend students bring their own technology devices to school to mitigate the spread of the virus.

After Tuesday’s meeting, the draft of the reopening plan will be published on the school system’s website on Wednesday, June 3. This will allow the public to read and offer feedback.  Feedback will be added to the previous questionnaire that has been collecting data.

More in this category: « Humane Society's I Need A Last Name Dog.... Despite Weather Conditions Launch is Scheduled for Today »
back to top