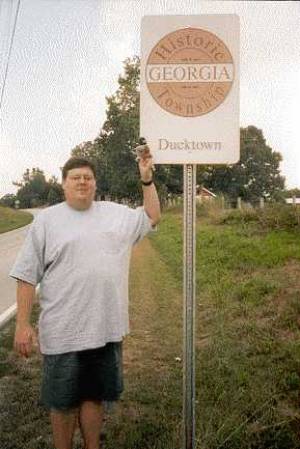 While sitting at home, please enjoy the story that Dr. Linda Ledbetter wrote about Ducktown, Georgia.  Dr. Ledbetter was one of the first two "covergirls" for FoCo Woman magazine.  Dr. Linda Ledbetter is a true Forsyth County legacy.  Her creative mind, entrepreneurial spirt and passion for her community maker her a leading example of a FoCo Woman.

How Ducktown Got it’s Name…

From Growing Up in Ducktown, written by  Dr. Linda Ledbetter

Ducktown, Georgia was incorporated as the second city in Forsyth County in 1912.  The incorporation papers were found by Lamar Sexton, the husband of the late Francis Ledbetter Sexton.  Francis was the daughter of Herbert Ledbetter.  These papers will follow…

On August 9, 1912, the General Assembly of the State of Georgia passed “An act to incorporate the town of Ducktown, in Forsyth County, including an area extending one fourth (1/4) of a mile in every direction from the cross-roads near the store now occupied by L.T. Ledbetter, and to provide for the municipal offers thereof, fix their term of office and compensation, specify their duties and provide for a municipal government for said place, with the usual authorities vested in said corporations in this State, and for other purposes…

Now how did this name come to be….

My Grandfather, L. T. Ledbetter, had a store in Ducktown.  In the store was the Post Office and Papa was also the Postmaster.  The mail was getting mixed up with Harmony Grove’s mail.  Harmony Grove was also in Georgia close to Ducktown.  The customers were complaining.  Papa wanted the mail straightened out so he wrote the Postmaster General of the United States and asked if he could change the name.  The Postmaster wrote back and said Papa could pick a name.  Papa, was of course, surprised.  He assumed the government in Washington would assign a new name.  The family, including his son, Herbert A. Ledbetter, said that Papa got the letter on a day when it had just rained, a lot.  The local ducks, owned by families of Sam and Bill Dasco, had converged on the mud puddles around the store.  The roads were dirt, of course and ruts and puddles were deep and large where the buggies ran.  All you could see that day was ducks.  Papa looked out at the large flock and said the logical name for the place was Ducktown.  And so, it was.

A neighbor, Mr. Hawkins remembers Mayor Ledbetter saying the town got it ‘s name because a flock of quacking ducks used to roam the town.  “When anyone came to town,” Hawkins remembers Ledbetter telling him, “the ducks would follow the visitors anywhere they went to the store, the gin, the blacksmith shop, or anywhere besides the calaboose.”  They were very pesky.

Ledbetter’s store was the center of town.  The town stretched in a circle ½ mile around the store.  The general store sat at the intersection of Heardsville Road and Franklin Goldmine Road.  Now “Ducktown wasn’t an isolated community, even in the early years.  Heardsville Road wound its way into the hamlet bearing the same name and branched off toward the Mt. Pisgah community.  “The Goldmine Road” as it was called, carried travelers toward the mines of the Franklin-McDonald Mining and Manufacturing Company and a little closer to Ball Ground, the nearest railroad dept.  It was a business district, a busy little town, recalled the Rev. L. B. Haygood.  “They done a lot of business –buying cotton, selling fertilizer, funning the cotton gin, and grinding corn.  I’ve seen the road when you couldn’t get through except for a narrow driveway between the bales of cotton surrounding the farmers who brough their cotton to be ginned.

There were only five or six families living around Ducktown when it was incorporated, but the area grew.  The cotton from Ducktown was sent to Canton and shipped to textile mills throughout the country.  People moved to Ducktown and several large homes were built on Heardsville and Franklin Goldmine Roads.  A blacksmith shop and a mule barn were established.  A mule barn owned by Alfred Holbrook would sell mules priced from $75 to $125 each.  There was a barber shop owned by Arthur Sounds.  There were warehouses next to the gin owned by Papa Ledbetter.  There was also a jail called a calaboose.  It was said by many the some of the local men liked to fight on Saturday night and sometimes they ended up in the calaboose.  The local police chief, called a constable, was Frank Cochran.  He was appointed by the Mayor and four Alderman.  Violators of the town’s ordinances could receive a fine or be put in the calaboose.  Papa Ledbetter said there were not many violators although sometimes people were locked up overnight to sober up.

Papa Ledbetter also had an Odd Fellows-Mason Hall on the second floor of the general store.  When the general store was torn down in the 1940’s, the lodge was built new about 500 feet from the new smaller general store.  In the 1950’s L.B. Haygood bought the property where the lodge was located.  The lodge then was re-located to a building on Georgia Highway 20 where it stands today in walking distance to the Forsyth-Cherokee Line.

Tweet
Published in Local News
More in this category: « This Day in History March 31st The Act of Waving is on the rise! »
back to top