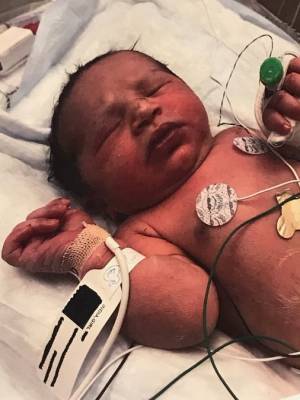 The Forsyth County Sheriff's Office released a photo of a newborn baby girl that was found abandoned Thursday night along an isolated stretch of road in southeast Forsyth County.

In press conference around 1:30 pm today Sheriff Ron Freeman, said residents found the child around 10 p.m. wrapped in a plastic bag, in the wood line along Daves Creek Road. Freeman said that the residents heard a baby crying in the woods and chose to investigate, potentially "saving the child's life."   Once deputies arrived on scene, the newborn was quickly taken to a local hospital and is in a stable condition, he said.  The newborn has been named India by local hospital staff.

The sheriff's office believes that the child was intentionally abandoned, Freeman said,detectives are trying to identify and locate the child's mother, to check on her condition and find out why the child was abandoned.

Freeman said that anyone with any information on this incident or know of anyone that is pregnant that now appears to no longer be pregnant and the whereabouts of the baby are unknown should call the sheriff's office's non-emergency line at 770-781-3087.