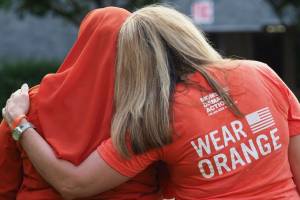 You May See Orange In Forsyth County This Weekend..

More than 100 Americans are killed with a gun everyday, according to the organization, and guns are the second-leading cause of death for American children. The events are dedicated to honoring victims of gun violence.

Gun safety advocates are spearheading the effort, which has attracted brand partners including Levi Strauss & Co. and Dick's Sporting Goods, as well as celebrities including Julianne Morre, Laura Dern and Keegan-Michael Key and more than 200 mayors plan to partake..

Tweet
Published in Local News
More in this category: « Girls Scouts Do more than Cookies... Newborn baby found inside of plastic bag in Forsyth County woods »
back to top