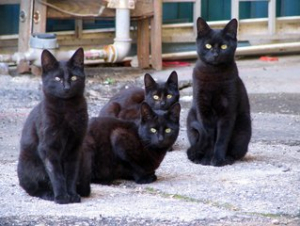 It’s National Black Cat Day on October 27th! Black cats need a little positive PR as their reputation as an omen of bad luck is well-known (and unearned, frankly). In the lead-up to Halloween, National Black Cat Day provides the chance for feline fans to show off their love for the oft-maligned, but always iconic animal.

The black cat carries a unique status among the wide batch of different cat breeds. In some locales, notably Scotland, Britain, and Japan, the presence or appearance of a black cat is indicative of imminent good fortune and prosperity. Beyond these regions, though, public favor of the black cat runs sharply southward. In much of the Western world, black cats are considered to be harbingers of misfortune and wickedness. This unfortunate association stems from an image that will be familiar to many readers, which is that of the black cat serving as a companion to potion-brewing, spell-casting witches everywhere.

This relationship would prove to hold severe consequences for owners of black cats in America in the early 17th century. As the Pilgrims established their occupancy on the east coast of the country, they maintained a strict suspicion of anything remotely tied to the perils of witchcraft. The black cat served a symbol of the supposed evils and Satanic sympathies of witches, and as a result, those found harboring black cats would receive harsh punishments; some would even be sentenced to death.

While, in general, the fears surrounding the demonic potential of witches has subsided significantly, the black cat will be left wondering why it still must suffer the consequences of a damaged collective reputation. According to several animal-advocacy groups and adoption agencies, black cats experience lower rates of adoption and higher rates of euthanization relative to other cat breeds. Because of this, National Black Cat Day stands as a fantastic opportunity to subvert these trends and demonstrate appreciation for an animal that could itself use a little luck.

Tweet
Published in Local News
More in this category: « Taste of the Fair
back to top