Absentee Ballots at all Time High 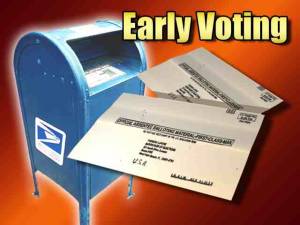 The Coronavirus Pandemic spurred an overwhelming majority of votes cast via absentee ballots.

Roughly 80% of the more than 1 million votes cast were absentee ballots sent in the mail or placed in temporary drop boxes.  That amounts to 810,000 absentee ballots cast.  This far exceeds the 223,000 mail-in votes collected in the 2018 gubernatorial election.’

Voters who turn out on Election Day should expect longer lines than usual.  Volunteers will be keeping people spaced six feet apart in line and take more time to sanitize voting areas

Many voters in the state are still waiting to receive absentee ballots after requesting them weeks ago.  Election officials acknowledge thousands of voters were still awaiting absentee ballots, particularly in Fulton County.  Absentee votes must arrive at county elections offices by 7 p.m. on June 9.

More in this category: « It is National Donut Day!!! Summer Work Out »
back to top