We are Go for Launch 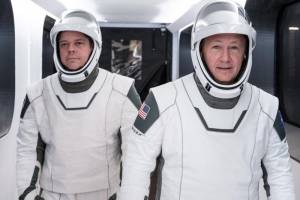 CAPE CARNAVERAL, FLa.  SpaceX is making final preparations for launch TODAY (5/27/2020) for Demo-2 mission to Launch NASA astronauts from U.S. Soil for the first time since 2011.

A Space X Falcon 9 rocket and Crew Dragon spacecraft will take Doug Hurley and Bob Behnken to the International Space Station.  The launch is scheduled for 4:33 pm EDT from launch pad 39A of the Kennedy Space Center in Florida.  This launch pad was also used for Apollo and space shuttle programs.

This launch is the first time a private company, rather than a national government, sent astronauts into-orbit.  The astronauts spoke a a news briefing Tuesday and spoke how this was a unique opportunity to bring all of American together in one moment of time.This launch is eagerly anticipated.

Approximately 45 seconds from liftoff the SpaceX launch Director will give the final go.  However, NASA has the right to intervene if it sees something it disagrees with.

COVID-19 will make this launch much different from the past as the large masses of people will not be in the launch area.  President Trump and Vice President Mike Pence are expected at Kennedy for the planned liftoff.  With the highest priority being the astronauts' safety.

Launched atop the Falcon 9 rocket, Crew Dragon will accelerate to approximately 17,000 mph  placing the capsule on course for the International Space Station.  The length of the astronauts stay is yet to be determined.

The last space shuttle mission, launched from Kennedy Space Center was July 8,2011.  That was the space shuttle Atlantis and carried four NASA astronauts to resupply the ISS.  Since this time the U.S. has relied on Russian Soyuz rockets.

launched from the Baikonur Cosmodrome in Kazakhstan to get astronauts into space.  This was at a cost of about $75 million to the U.S.