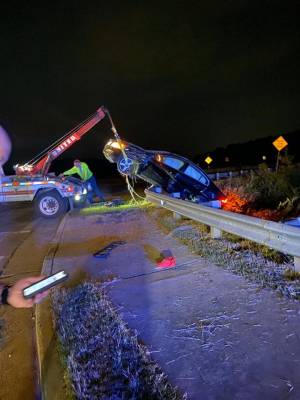 This driver is facing several charges, Alpharetta police is  so very thankful they didn't have to deliver a fatality notification to his, or anyone else's family.

One of Alpharetta DUI Officers clocked this Volvo traveling 131 mph, heading north on GA400 through Alpharetta near Haynes Bridge Road early Sunday morning. The officer tried to catch up and stop the car, but once the driver saw the blue lights, he accelerated faster.  The officer stated (on Facebook post)  “He tried to exit at McFarland Pkwy but was going too fast, went airborne across McFarland, hit the concrete median, and flipped over the guardrail. He was able to walk out”.